Join our team. Are you ready to change the game? Find out more →

What is a Tamping Rammer Machine- Mechanism, Benefits & Uses 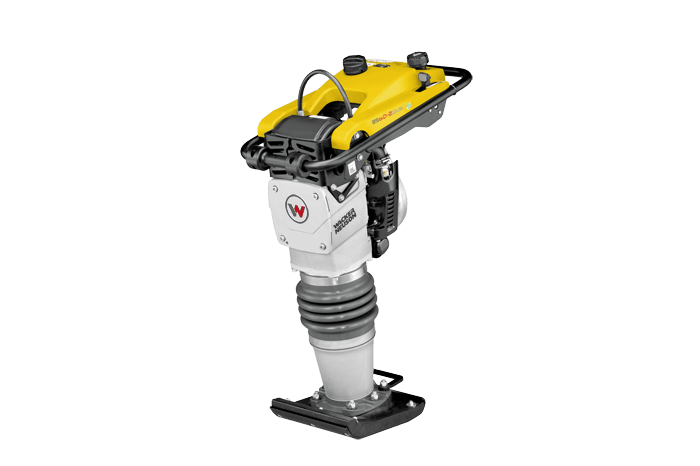 Tamping Rammer construction equipment is required for compacting different types of soils. The force of the rammer impacts the surface of the soil to level and compact it evenly. The rammer is ideal for the compaction of the ground for the construction of roads and leavening of gardens or landscapes structures.

The tamping rammer powders the heavy chunks of soil particles and increases the dry density of soil. A force of 2-3 tonnes is applied with a frequency of 600-700 blows per minute to compact the soil surface. The force is best suitable for compacting adhesive and cohesive soils. They are particularly effective in compacting trenches and other confined areas.

Tamping rammers are popularly known as jumping jacks. The name is derived from the working principle and design constructed at a certain angle to allow a jumping motion.

The jumping jack is principally made up of four working components- a torque producing machine, a gear, a spring cylinder, and a plate shoe.

Depending on the fuel required for the working of the rammer, it can be a petrol or diesel operated tamping rammer .

How to use a jumping jack compactor:

Wacker Neuson tamping rammer works ideally for the compaction of the soil in construction settings. The following steps are essential for the proper working of the tamping rammer.

·         Firstly, place the choke lever in a closed position and start the throttle level. This begins the flow of the fuel towards the engine.

·         Then, pull the grip handle and accelerate the engine. After the engine starts, turn the choke into an open position.

·         Putting the choke into an off position will switch off the machine and cut the fuel motion of the choke from going into the foot of the rammer.

·         Finally, it is advisable to keep the machine in an upright position during storage.

Wacker Neuson jumping jacks are intended to be used in confined areas as well as large open grounds like roads and harbors. They are ideal for the compaction of asphalt and roadbeds with low water content.

·         The tamping rammer equipment has a well-balanced structure and design that allows it to stand erect during vibrations.

·         It works minimum maintenance and yields greater productivity. This in turn generates more profits because of decreased repair costs.

·         It is equipped with reliability, optimum performance, and easy operations.

·         Before the tamping rammers machines are available to the consumers, they are tested for about 500 hours. It ensures that there is no defect while it’s working.

For construction and scaffolding equipment regarding queries, Contact us at 93275 56036 We, Smit Corporation established in the year 2018 at Surat and being ISO certified, we are instrumental in providing innovative construction machinery and proficient atter sales services & spares at the affordable price, that would contribute to revolutionize the construction equipment segmenting in India. We are the authorized dealer of Wacker Neuson Equipment - a leading global manufacturer of light and compact equipment, offering Indian customers a comprehensive product and service range. Along with it, we deal in all kind of Construction Machinery like Bar Bending Machines, Bar Cutting Machines, Tamping Rammer, Concrete Vibrators, Suspended Platforms & Walk Behind Rollers. We've served many prestigious government projects & private projects as well. Backed by the expert team having vast technical knowledge and experience in customer relationships. We are sure to pave you a smooth road to success in any construction project.